After setting up my HF station I am enthused with all that mode has to offer. I have made several foreign QSO's and had my share of initial ups and downs.

The X1M QRP rig has worked very well and with limited output I am impressed with the performance. Having acquired a Kenwood TS570D, the realm of HF operation has opened up exponentially. Being able to use the full 50W allowed by my licence has made a big difference and at the same time brought about one major issue. I am using an end fed wire with an un-un and it was mounted with the feed point  underneath the soffit at the home QTH. Whilst blissfully unaware of any issues I was operating a few nights ago and my neighbour came round to tell me that their touch lamps were going on and off with my transmissions. Gutted, I immediately ceased transmitting and became somewhat dejected. After consulting with my radio friends I formulated a plan to eradicate this EMC issue. One option I read about was to fit resistors in the lamps - out of the question. So, I moved the feedpoint 10 metres away from the house and ran the radiating element down the garden, also away from the house. I wound about 5 turns of coax into a choke at the feedpoint and then called on the neighbour to do a test transmission. Using 50W I carried out a few test transmissions on 40M and, hey presto, the problem was solved.

The lesson learned? End fed antennas that use the coax braid as a ground are susceptible to EMC issues unless precautions are taken. I intend to replace the aerial with an OCFD at some point and get it mounted a bit higher up. Performance was also increased by the addition of a counterpoise so now, for the moment, all is well and I have a functioning station.

Using Ham Radio Deluxe is a treat. Controlling the radio from the laptop is a cinch and logging via the program is also simple. I want to set to grips with data modes. I have downloaded FLdigi and a couple of other programs to try and to see which one suits me best. I already have a ZLP Minipro data interface and a suitable cable for the Kenwood so data and SSTV are within my grasp.

Better news for our local repeater, GB3GR, as the repeater keeper has installed better aerials and a cavity filter, along with a preamplifier. Access is greatly improved and with a link to the Allstar UK Hub, international communications are possible.

I am always astounded at the level of friendliness, helpfulness and understanding among the Amateur Radio community and especially those who have given me both advice and assistance - a heartfelt thanks to all of them. 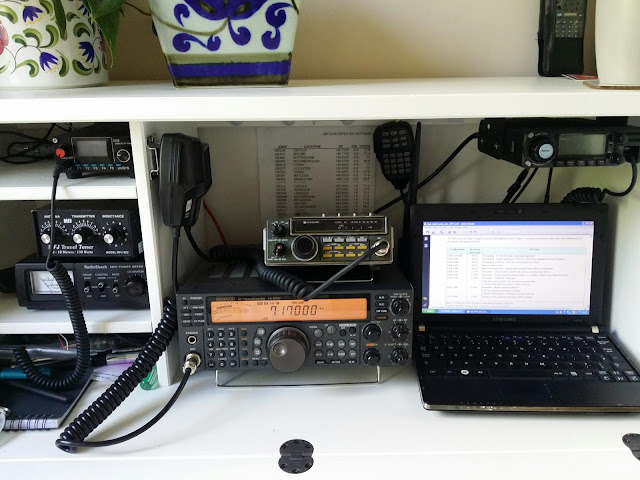