The handset is typically Chinese in manufacture and operates on a trimmed down version of Android 4.4. As a phone it is adequate in so much as it was never designed to be a smartphone, however I run EchoLink,  Zello and Broadnet with no issues at all. Major apps such a Facebook will probably run but the screen and keypad may not be to everybody's liking.

Audio quality either through the speaker or earpiece is very good, with a loud output so ideal for outdoors or noisy environments.

Broadnet is a Voice over Internet PTT system, akin to the Airwave system favoured by Government agencies and the police here in the UK. It is available for download via Google Play for all Android devices and is free of charge for Licenced Amateurs after submitting a registration. All the features work with a smartphone or tablet, with the exception of the Broadnet/AllStar link, which requires a further registration and the Broadnet BN01 handset  (access to AllStar is not possible with the Android app).

Audio quality is superb - clear and reliable comms, providing you have a good data or wi-fi signal. Peer to peer calls and text messaging are available as well as group calls. There's not much else to say about the Broadnet system itself except to day that it works extremely well.

The BN01 handset is a little pricey. It has a PTT button and a pseudo antenna on top but it is essentially an Android phone with a PTT button. It has a conventional keypad as well as a touch screen. The touch screen is a little too small for exclusive use but I find using a combination of touch and key pad operation works sufficiently well. The screen resolution is poor but again, adequate for the purpose. The device has two SIM slots, SIM 1 being the 3g capable one with SIM 2 being GPRS only. SIM 1 is a standard sized slot and SIM 2 is micro SIM. The camera is disabled but I would think that it could be enabled with a software tweak. There is provision for a micro SD card so it gives extra storage, should it be needed.

The AllStar link is provided by a third party operator and utilises their server for access. There have been issues with this service, which is provided by an Amateur in his spare time as a service to other Amateurs, but it is now running very smoothly. The UK Net is a channel exclusively available to Amateurs and standard Amateur Radio operating procedure is observed.

I'm having immense fun with this handset and the Broadnet service and I also find it all very rewarding. There is almost constant activity on the AllStar UK Hub, so there is always someone to talk to and the regular participants are extremely knowledgeable and friendly and have tons of patience - new operators or those un-used to the system are welcomed and guided in a non-patronising manner.

The handset is pricey, but of reasonable quality. The Broadnet service is not without it's glitches but works in a generally stable way. The AllStar link is good, although the guy who hosts it is often too busy to attend to problems - but he does get round to sorting things out eventually (he is an amateur, has a day job and provides this service free of charge).

My advice is to try out the Android app first, then if you want AllStar? buy the handset (that's what I did and I'm glad I did). 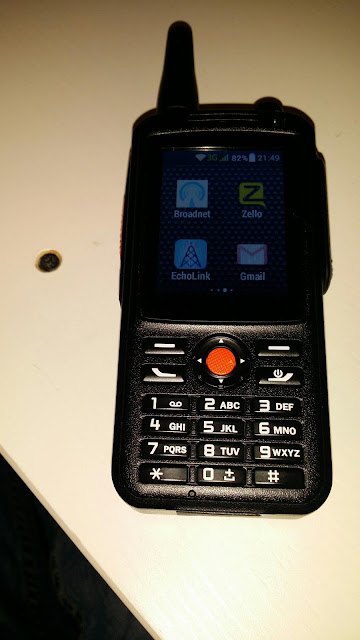