The first thing you notice is its diminutive size - don't let that fool you, it's a fully featured dual band rig with CTCSS, DTMF and a range of useful options.

With 25W on VHF and 20W UHF, it's not short on power either. The user interface is almost identical to the Baofeng Handhelds and manual programming is, let's say, challenging. Top tip - get a programming cable!

Receive sensitivity is good and transmit audio is a little quiet, but useable. Maybe a mic upgrade would improve things.

The switches are typically "Chinese" in that they are a little unresponsive but once used to the feel they do what they are supposed to do. Due to the small size, mounting in numerous locations is possible and mine is mounted on the dash top (as can be seen in the photo).

The S meter is nothing more than an RX indicator - the bars move across the display but almost every signal that breaks the squelch is S9+ so it's bit of an inaccurate measurement. Having said that, weak signals are easy to hear due to the speaker being on top of the unit. There is no provision for an external speaker,  the rear jack being for programming only.

In conclusion, not bad for around £70 and useful, even if it's bought as a stand by set - but a programming cable is essential. 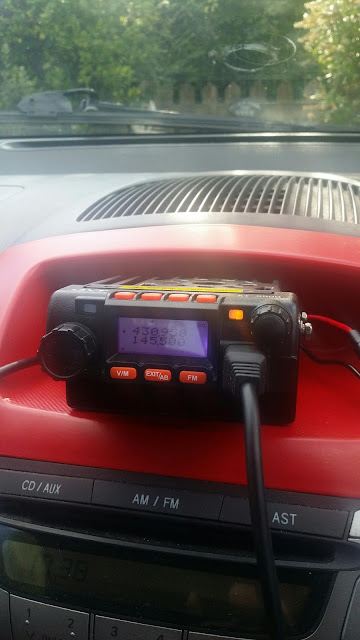